After Leeds United’s 5-0 demolition of West Bromwich Albion at the Hawthorns, Amazon Prime pundit Karen Carney entertained a really rather well documented criticism of Leeds under Marcelo Bielsa, if not in a slightly clumsy way. Carney postulated:

“They (Leeds) out-run everyone and credit to them. My only concern would be, ‘would they blow up at the end of the season?’

We saw that in the last couple of seasons and I actually think they got promoted because of Covid in terms of it gave them a bit of respite. I don’t know whether they would have gone up if they didn’t have that break.”

This BSA workshop combined contemporary history with event management, cultural studies and theory with studies of national cases, the binding theme being the whys and wherefores of the populist profile of particular sport and leisure practices and cultural formations. Whereas the concept and theory of spectacle, and the notion of carnival, have been applied to sport mega-events, music festivals and rock concerts, the populist dimension that may have characterised and sustained such cultural phenomena has not received comparable attention. This day was the first of a couple of workshops and conference sessions designed to explore this relatively neglected aspect of the leisure spectacle.

END_OF_DOCUMENT_TOKEN_TO_BE_REPLACED

By Robert A. Stebbins. University of Calgary

Much of leisure in the West, and possibly outside it as well, is organized by way of a social world of some sort. The most complex formations are found in the serious pursuits, with the casual leisure activities generally being much more superficially structured in this regard. Nevertheless, within these two types we find considerable variation along the dimension of complexity and hence the richness of a given social world. My goal in this article is to show how the concept illuminates experience in certain kinds of leisure activities and therefore why it often plays a central role in explaining why people go in for them. First, however, we must review the nature of social worlds.

END_OF_DOCUMENT_TOKEN_TO_BE_REPLACED

By Christopher Russell
University of Worcester

During May 2018 I travelled to Switzerland to meet with a variety of colleagues and organisations relevant to my research – which explores the potential significance of identity for people affected by dementia, who engage with activities of leisure centres.

Following a successful application the visit was funded, to a great extent, by the Leisure Studies Association Research and Enterprise Development Fund. The trip provided unique opportunities to discuss my research, and its potential application and dissemination, with interested parties from Switzerland and across the world. Reflection upon the visit will also help inform my progress as the PhD continues.

END_OF_DOCUMENT_TOKEN_TO_BE_REPLACED

Our treasurer, Sandro Carnicelli has been successfully selected to be member of the Royal Society of Edinburgh Young Academy of Scotland (YAS)

END_OF_DOCUMENT_TOKEN_TO_BE_REPLACED

Leisure history has always been an important though relatively minor interest within leisure studies.  In both cases the idea of a work-leisure relationship was a factor of origin. For much of the twentieth century leisure was not a field of historical investigation, although general social histories often included accounts of sports, games and pastimes. The emergence of an identifiable field of the history of leisure owes much to Keith Thomas’ seminal publications on work and leisure in industrial society,[1]published in the mid-nineteen sixties. In the nineteen-seventies and nineteen-eighties this field began to expand with the publication of significant works, for example Peter Bailey’s Leisure and Class in Victorian England, Hugh Cunningham’s Leisure in the Industrial Revolution and Stephen Jones’ Workers at Play: a Social and Economic History of Leisure, 1918-1939.[2] In accordance with contemporaneous interests within leisure studies, these were largely concerned with social class and social control. Many included the word ‘leisure’ in their title. However, if we accept – and not everyone does – that several contributions to the historiography of leisure have been written as histories of sport, tourism, gender, or specific forms of leisure such as the cinema and dancing, then the field expands considerably. The current rate of publishing suggests that leisure history in the wider sense remains a field in rude health.

END_OF_DOCUMENT_TOKEN_TO_BE_REPLACED

Apologies for missing last month’s top picks! Marking season got the better of me but we are back in action with the picks from our secretary, Spencer Swain!

Let me start by saying how difficult it has been to narrow down my three picks for this blog edition. The Leisure Studies Journal has numerous articles that have inspired me to think more critically about leisure over the years. Therefore, the three papers that I have selected are only a microcosm of the fantastic research and scholarly insight that has been and continues to take place in the journal and the broader field in general.

END_OF_DOCUMENT_TOKEN_TO_BE_REPLACED

by Ian Patterson
(reproduced by kind permission of CABI publishing)

The populations of most developed, and some developing societies are growing older. This is because birth rates have decreased and life expectancies are increasing due to medical advances and better health care, as well as greater public health education with regard to diet, exercise and improved safety awareness. As a result, population projections have estimated that there will be a huge increase in the numbers of older people who are living longer; and it has been estimated that by 2050, 2 billion people will be aged 60 and older, accounting for 22% (or 1:5) of the world population.

Because of this global trend, business operators are becoming increasingly aware of the significant impact that baby boomers (who are born between 1946 and 1964) are having on the tourism industry. It has been estimated that in the future this population growth rate will begin to dominate the tourism market. Already this growing segment of this population is exerting its significant ‘economic clout’ by demanding a diverse range of tourism services not previously considered mainstream offerings for older individuals. Tourism researchers and practitioners alike are beginning to appreciate that as a direct consequence of global aging patterns, baby boomers are now accounting for a greater share of all vacation and holiday spending than previous cohorts of older travellers.

In 1999, over 593 million international travellers were aged 60 years and over. This level of tourism activity accounted for approximately a third of the total amount spent on holidays in that year. By 2050, this figure is projected to exceed two billion trips per annum (World Tourism Organization, 2001). These future population projections imply that becoming older does not necessarily restrict people’s desire to travel, in fact the opposite is actually occurring.

This significant population shift is having a notable impact on the type of holidays undertaken and the destinations that are chosen. Although travelling to warmer climates is still popular, many older travellers are now demanding new and exotic destinations in their search for memorable experiences which often includes special interest areas such as educational tourism, soft adventure holidays, visiting heritage sites, and volunteering holidays.

As a result, it is becoming more likely that the volume of beach holidays will fall markedly, and educational and/or cultural tourism will increase as baby boomers prefer to take holidays where they can learn something new, and/or embark on different historical and cultural experiences.

Travel trends are showing that being older will no longer restrict people’s desire to travel within their own country or overseas. They are now becoming a separate and distinct market because they are still feeling healthy, are often wealthier, better educated, and more independent than previous generations of older people who are aged 65 years and older. Because they have more time for leisure and are relatively free of family obligations, they prefer to travel for longer periods of time, often in the off peak seasons and have a greater concern for personal safety when travelling compared with younger age groups. Because of the great heterogeneity and diversity of this older population, they require a greater variety of travel options than previously, ranging from soft adventure travel that they may want to organise themselves through the internet, to group travel where everything is done for them by the travel agent and they stay in five-star hotels.

However, tourism researchers need to be careful not to lump all people together as ‘older’ or ‘mature’ if they are over an arbitrary age such as 55, 60 or 65 years. If they do, this shows a lack of understanding about what each particular age cohort is really like, especially in relation to their individual needs, interests, and lifestyles. It is important to understand that each cohort group of older adults has lived through a specific time in history that adds to their distinct characteristics, needs and interests. At the same time, there is individual variability in a person’s physiological changes, health status, psychological wellbeing, socio-economic circumstances, social and family situation and ethnic minority status. Despite this great variability, travel businesses are beginning to appreciate that the senior market is an important market segment and because of this, has begun to shift their advertising dollars away from other target groups to this growing baby boomer travel market.

Tourism and Leisure Behaviour in an Ageing World is available to buy from the CABI Bookshop now. 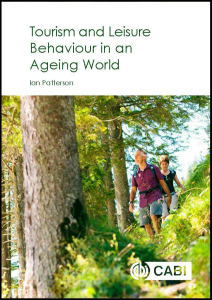 Enjoy a 20% discount using code CCIP20 in the CABI Bookshop by clicking the link above (valid until 31st January 2018).

Dr Ian Patterson completed his PhD at the University of Oregon in 1991 and has been a member of the academic staff in the School of Tourism at the University of Queensland since 2001 when he was appointed Associate Professor (He retired in 2015). He was Research Director of the School between 2001-2004, and 2008. His main research areas are exploring the social-psychological experiences of older people who undertake tourism and leisure activities that promote healthy lifestyles. He has published over 70 peer reviewed journal articles and 20 book chapters. In 2011 Dr Patterson was awarded a citation for his significant contribution to the development of his professional association, the Australian and New Zealand Association for Leisure Studies (ANZALS), and Life Membership in 2015. He was the Keynote Speaker at a Conference on Tourism and Ageing in Lisbon, Portugal, 26-28th November, 2015.

END_OF_DOCUMENT_TOKEN_TO_BE_REPLACED

Over the past 12 months we have funded a range of activities through the research and enterprise grant scheme. Here is a summary of two of the ongoing projects from Dr. Paula Danby and Dr. Rebecca Finkel both from Queen Margaret’s University.

END_OF_DOCUMENT_TOKEN_TO_BE_REPLACED

In his recent ‘Leisure Reflections 47’ on the LSA blog and newsletter Robert Stebbins referred to a recent paper of mine on the Serious Leisure Perspective (SLP) in Leisure Sciences (Veal, 2016). He listed ‘four problems’ with the paper, which he had previously identified in a ‘rejoinder’ (Stebbins, 2016), but did not refer to my reply (Veal, 2017). My immediate reaction on seeing Stebbins’ comments was to consider drawing readers’ attention to my reply, together with a brief summary, which I offer below. However, I then thought it would be constructive to take the opportunity to progress the debate further, and that is the aim of the second part of this contribution. It should be noted that I am not concerned just with the concept of serious leisure, but with the SLP as a whole and the claims made for it.